The City of Philadelphia today launched the Targeted Community Investment Grant Program to award microgrants to community-based organizations that offer high-quality violence prevention services and supports. The grant program is an integral part of the Philadelphia Roadmap to Safer Communities, a comprehensive action plan unveiled in January to address the increasing gun violence in neighborhoods across the city. The grants, ranging from $500 to $20,000, will specifically su

Please submit any events that your organization/agency is hosting during Reentry Month here, if you are interested in having your event advertised on the Reentry Coalition's Reentry Month Calendar. Our event planning fellows Khadijah Brown and Marcus Hall will follow up if they have questions regarding the event.

Freed from prison nine years ago, Brandon Flood is new secretary of Pa.’s pardon board | Will Bunch

April 7, 2019, Will Bunch - The Philadelphia Inquirer This column will probably come as something of a shock to all the people in Harrisburg who only know Brandon Flood – a bow-tied, bespectacled policy wonk with sartorial flair – as the persona that he laughingly calls “Urkel Brandon,” in a homage to one of TV’s most famous nerds. (Brandon Flood in his new office/ Jessica Griffin for the Philadelphia Inquirer) Flood, now 36, readily admits most folks who know him from nearly

The Pennsylvania Legislative Black Caucus in conjunction with the Pennsylvania Democratic Policy Committee will be hosting a public hearing on re-entry initiatives Access the PDF Here! 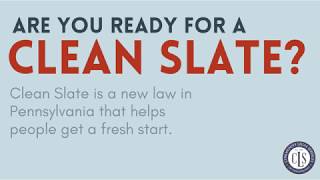 Do you really understand the new Clean Slate Law? If you hesitated, check out the video below from our member Community Legal Services, or click this link to view it on Youtube. Starting June 28, 2019, Clean Slate's automatic sealing will apply to charges that were dropped or where a person was found not guilty, as well as summary convictions and some minor misdemeanor convictions after 10 years without a new conviction. Sealing starts June 28, 2019, but you may have to wait

April 5, 2019, Ryan Briggs - WHYY Philadelphia’s new municipal identification card program drew crowds of interested applicants on its first official day. Dozens of people waited in a line that snaked across a City Hall corridor on Thursday in the hours after Mayor Jim Kenney launched the long-awaited local government ID program. Some applicants had made appointments with the city but others would wait hours to snag one of the cards. Many of Thursday’s applicants previously f

Apply for the StartupPHL Venture Program

The 2019 StartupPHL Venture Program is designed to support startup companies run by entrepreneurs from socially or economically disadvantaged backgrounds. This grant program provides funding for technology or technology-enabled ventures that may not have access to traditional forms of capital and founder networks. The Department of Commerce will provide grants to companies or organizations that can demonstrate an ability to increase the number of jobs available in the City of

April 4, 2019 WPVI ABC News Residents of Philadelphia can now apply for a municipal photo ID card. The city plans to issue the cards for people who don't have other forms of identification, such as driver's licenses. Anyone who is age 13 or older can get a PHL City ID. the card will display the cardholder's name, address, date of birth and self-identified gender. The cards will be available in multiple languages and can be used as an ID within the city and to access

April 2, 2019, Samantha Melamed - The Philadelphia Inquirer North Philadelphia native Robert Rihmeek Williams has been on probation for 11 years — a seemingly endless, telescoping sentence that has dogged him throughout his ascendancy as Meek Mill, the chart-topping rapper and, lately, activist for criminal justice reform. Now, while still under the weight of Pennsylvania’s unusually onerous probation laws — which, unlike most other states, allow supervision to stretch as lon

Hi all, The US Department of Labor has released their 2019 Reentry funding solicitations, for young adults and adults (https://www.grants.gov/web/grants/search-grants.html search FOA-ETA-19-01) - see this summary put together by Reentry Coalition Employment Subcommittee Co-Chair Sue Hoffman. In an attempt to facilitate partnerships, the Reentry Coalition is inviting you to share whether you are interested in pursuing the 2019 Department of Labor REO Grant Opportunity, AND exp
{"items":["5f6e4ba12bf81e0018b49306","5f6e4ba12bf81e0018b49307","5f6e4ba12bf81e0018b49308","5f6e4ba12bf81e0018b49309","5f6e4ba12bf81e0018b4930a","5f6e4ba12bf81e0018b4930b","5f6e4ba12bf81e0018b4930c","5f6e4ba12bf81e0018b4930d","5f6e4ba12bf81e0018b4930e","5f6e4ba12bf81e0018b4930f"],"styles":{"galleryType":"Columns","groupSize":1,"showArrows":true,"cubeImages":true,"cubeType":"fill","cubeRatio":1.3333333333333333,"isVertical":true,"gallerySize":30,"collageAmount":0,"collageDensity":0,"groupTypes":"1","oneRow":false,"imageMargin":32,"galleryMargin":0,"scatter":0,"rotatingScatter":"","chooseBestGroup":true,"smartCrop":false,"hasThumbnails":false,"enableScroll":true,"isGrid":true,"isSlider":false,"isColumns":false,"isSlideshow":false,"cropOnlyFill":false,"fixedColumns":1,"enableInfiniteScroll":true,"isRTL":false,"minItemSize":50,"rotatingGroupTypes":"","rotatingCropRatios":"","columnWidths":"","gallerySliderImageRatio":1.7777777777777777,"numberOfImagesPerRow":1,"numberOfImagesPerCol":1,"groupsPerStrip":0,"borderRadius":0,"boxShadow":0,"gridStyle":1,"mobilePanorama":false,"placeGroupsLtr":true,"viewMode":"preview","thumbnailSpacings":4,"galleryThumbnailsAlignment":"bottom","isMasonry":false,"isAutoSlideshow":false,"slideshowLoop":false,"autoSlideshowInterval":4,"bottomInfoHeight":0,"titlePlacement":"SHOW_ON_THE_RIGHT","galleryTextAlign":"center","scrollSnap":false,"itemClick":"nothing","fullscreen":true,"videoPlay":"hover","scrollAnimation":"NO_EFFECT","slideAnimation":"SCROLL","scrollDirection":0,"scrollDuration":400,"overlayAnimation":"FADE_IN","arrowsPosition":0,"arrowsSize":23,"watermarkOpacity":40,"watermarkSize":40,"useWatermark":true,"watermarkDock":{"top":"auto","left":"auto","right":0,"bottom":0,"transform":"translate3d(0,0,0)"},"loadMoreAmount":"all","defaultShowInfoExpand":1,"allowLinkExpand":true,"expandInfoPosition":0,"allowFullscreenExpand":true,"fullscreenLoop":false,"galleryAlignExpand":"left","addToCartBorderWidth":1,"addToCartButtonText":"","slideshowInfoSize":200,"playButtonForAutoSlideShow":false,"allowSlideshowCounter":false,"hoveringBehaviour":"NEVER_SHOW","thumbnailSize":120,"magicLayoutSeed":1,"imageHoverAnimation":"NO_EFFECT","imagePlacementAnimation":"NO_EFFECT","calculateTextBoxWidthMode":"PERCENT","textBoxHeight":0,"textBoxWidth":200,"textBoxWidthPercent":50,"textImageSpace":10,"textBoxBorderRadius":0,"textBoxBorderWidth":0,"loadMoreButtonText":"","loadMoreButtonBorderWidth":1,"loadMoreButtonBorderRadius":0,"imageInfoType":"ATTACHED_BACKGROUND","itemBorderWidth":0,"itemBorderRadius":0,"itemEnableShadow":false,"itemShadowBlur":20,"itemShadowDirection":135,"itemShadowSize":10,"imageLoadingMode":"BLUR","expandAnimation":"NO_EFFECT","imageQuality":90,"usmToggle":false,"usm_a":0,"usm_r":0,"usm_t":0,"videoSound":false,"videoSpeed":"1","videoLoop":true,"jsonStyleParams":"","gallerySizeType":"px","gallerySizePx":670,"allowTitle":true,"allowContextMenu":true,"textsHorizontalPadding":-30,"itemBorderColor":{"themeName":"color_18","value":"rgba(95,119,184,1)"},"showVideoPlayButton":true,"galleryLayout":2,"targetItemSize":670,"selectedLayout":"2|bottom|1|fill|true|0|true","layoutsVersion":2,"selectedLayoutV2":2,"isSlideshowFont":false,"externalInfoHeight":0,"externalInfoWidth":0.5},"container":{"width":670,"galleryWidth":702,"galleryHeight":0,"scrollBase":0,"height":null}}
12
3
4